It is a unique programme initiated by Kristu Jayanti College of law. The progrmme includes an expert talk by erudite scholars of law such as Judges, Professionals, and Professors and other eminent scholars followed by interaction with the students to facilitate understanding on various issues of legal significance. Nyaya Samvada is conducted every weekend as part of the curriculum to provide the students with the benefit of hearing to the erudite legal scholars and interact with them on legal issues.

The expert explained about the legal aid and its benefits to the financially backward section of the society. He discussed the procedure of the functioning of the legal aid. He also informed about the legal aid committee how it is constituted and for what purpose. The legal aid services not only limited to the court proceedings it can be taken for Tribunal or any of the judicial proceedings. He also cited certain real life incidents where poor people have got the justice in various cases.

The expert lecture came to an end with the questions by the students and the minds of the students were ignited with a strong passion to fight for justice. 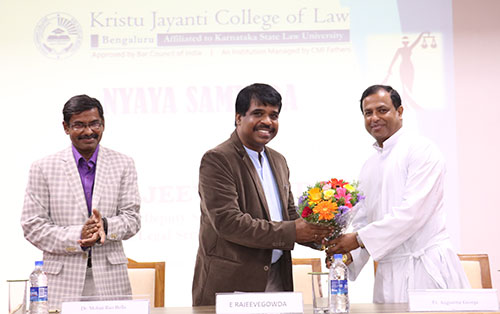 The expert discussed about how corruption have killed common man. Sir also discussed out the various disputes and inequalities that he has come across when he was in service. Sir stressed about the change that and individual can bring if one has the two vital virtues of honesty and presence of values embedded in oneself. Sir spoke about various cases he had worked on to bring a change in the society. Sir spoke about the numerous situations and problems that have augmented out of greed and lack of humanity. Sir spoke about the values which human being should possess i.e. contentment and humanism and that these two alone can take a person a long way.

The expert lecture came to an end with the questions by the students and his speech was extremely inspirational for everybody indeed. 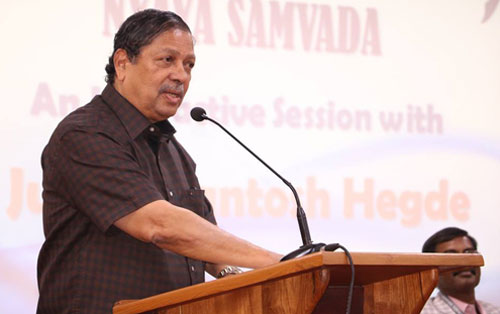